Note: this article was orginally published December 9 2015. It has been subsequently edited and updated with new photos. -Cathy Gilmore

A recent article on lds.org, Reclaiming Hill Cumorah1, prompted us to share some sources related to Hill Cumorah, its monument, and pageant beginnings. Our grandmother Dorothy Smith Clark’s papers reveal her connections to Cumorah  through her parents Hyrum and June Bushman Smith, who were missionaries at the Cumorah Farm from 1935 to 1939, and her friend Torleif Knaphus, who sculpted the Hill Cumorah  monument. In searching Dorothy’s diaries and letters on her Kindex archive, we are able to provide insight to our family’s connection to this historic sight.

Friendship with Torleif Knaphus, sculptor of the Moroni Monument

Partly as an effort to expand Dorothy’s educational and artistic opportunity, Dorothy’s family moved to Salt Lake City from Lethbridge, Alberta in 1930. In 1931, the recently widowed Torleif Knaphus took an interest in Dorothy. As her artistic mentor—and for a time—her suitor, Torleif escorted her on artistic excursions, instructed her in sculpting, and employed her in making handmade Christmas cards and sketches. Dorothy must have been flattered, as my grandfather Ellsworth was also competing for her attention. In her diary she wrote:

Went by Orem Electric to annual Springville Art Exhibit with T.S. Knaphus, sculptor. Spent 3 hours in Provo, sight-seeing on our way back to S.L.C. Took kodak snaps on B.Y.U. campus.

This was a very interesting day for me and rather an outstanding one I suppose, inasmuch as I was so kindly favored and well treated by one so prominent in his sphere.

En route he gave me valuable instructions and criticisms on art. Urges strongly that I begin to busy myself with “oils” and harness the talent he believes lies dormant. (I hope to do this soon, as I have been so inspired today). Left Knaphus at 8 P.M. to finish the day with Ellsworth. Youth does have its preferences.2

Indeed it does, as Dorothy settled on Ellsworth and became engaged that summer. Still, Dorothy maintained her friendship with Torleif and continued their mentoring relationship. In September of 1933 she wrote:

Was invited to Knaphus studio this evening where be showed me a newly-designed model of the shaft for the Hill Cumorah Monument. We ate some ice-cream there and talked of my doing some more painting there and maybe helping him with some new panels. Thrilled about getting into that work again.

Grateful for his attention and interest in her art, Dorothy later wrote:

I have Christmas card orders to fill for Torleif S. Knaphus in return for clay which he gave me for modeling.

He certainly has inspired me and been a great help in pushing me, as it were, along the road to accomplishment. I don’t know many other grown people who have so influenced me to good and been as companionable.

During their engagement, Dorothy encouraged Ellsworth to serve a mission. After he departed in December 1933 to a Western States mission, there is some hint that Torleif was keen to maintain a close relationship with Dorothy as he repeatedly sought out her company. Dorothy wrote:

Attended night class tonite and made my first water color scene (copy of Moser’s) in new style (from my former teachings.) Mr. Knaphus met me after work – asked me to go to Beaux Arts Ball this Saturday but I declined.

Although she didn’t attend the dance with Torleif, their close friendship often proved difficult for Ellsworth during his absence while serving as a missionary. On a temple trip to Manti that included the Knaphus family, Dorothy played an April Fool’s joke on Ellsworth and wrote to him that she and Torleif decided on a whim to be sealed there. Practical jokes notwithstanding, Dorothy and Ellsworth married in August 1934.

Dorothy with her parents Hyrum and June Smith, c1928

That same summer, Dorothy’s parents Hyrum and June Bushman Smith were called to be missionaries at the Cumorah Farm. After their marriage, Dorothy and Ellsworth moved to Idaho, but Torleif’s connection to the family remained as he completed the monument and attended its dedication in July 1935. Over the next year, Dorothy regularly wrote to her family in Palmyra, discussing plans for the Moroni monument dedication and future pageant. In her letters, Dorothy sketched out ideas for local advertisements for the pageant. 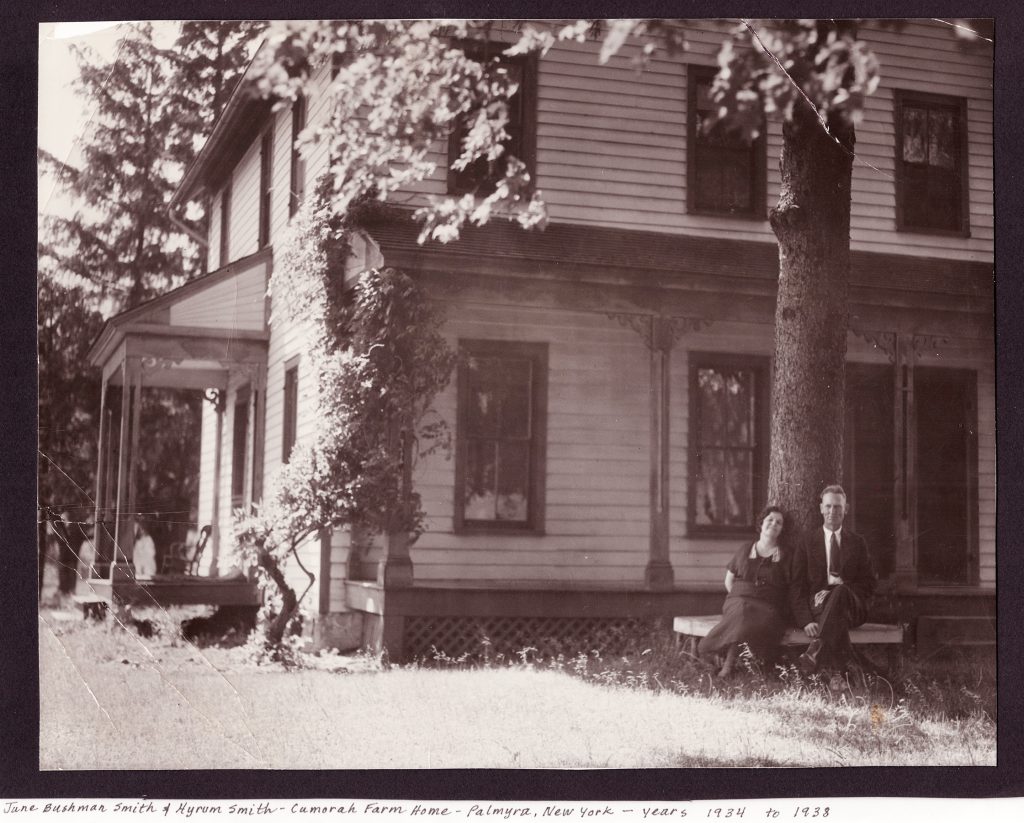 On May 26, 1935, Dorothy’s brother Oliver—a missionary in the Eastern States Mission—wrote about local missionary efforts and preparations for the monument’s dedication:

Along with 37 other missionaries of the Easter States mission I am engaged in a special drive in the area within a 20-mile radius of Palmyra, which will continue until the dedication of the Cumorah Monument on July 21. We hope to do some good work by this concentration of effort, which has significance with the connection of the monument. We are visiting every home—rural and urban—in the section. Eleven of us stay together at the LDS hall in Palmyra and drive out 5 or 10 miles every morning to a rural section in which we go tracting until late afternoon, when we return. Our week-ends I have visited Rochester and Buffalo for publicity work. At Buffalo I stayed at Mary Payne Chamber’s place. She has three children. Girl 11, girl 9, and boy 7….

Every day or so there are visitors here from somewhere we have been. Today Bro & Sis Douglas Anderson visited us and went to the Peter Whitmer farm with us in the afternoon. The church was organized there. Next Sunday we are having a session of the Cumorah District Conference here.3 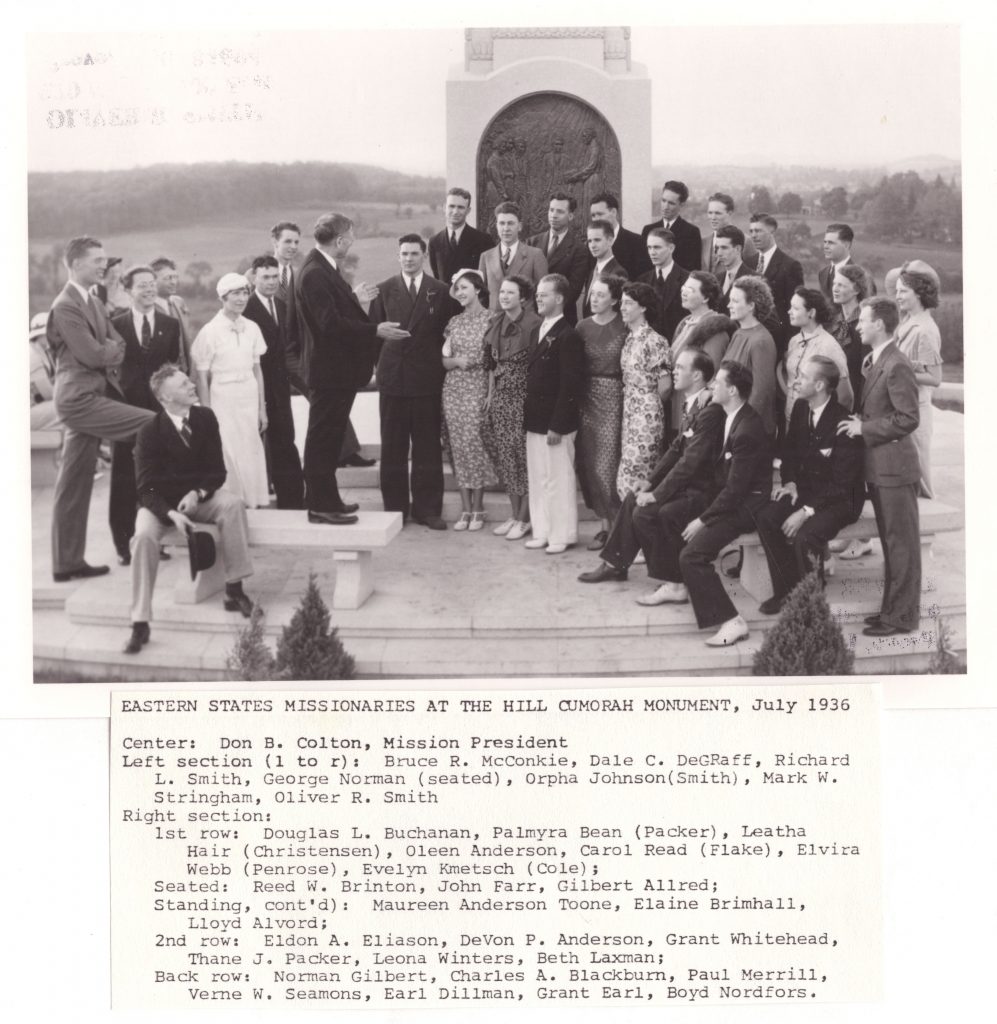 Dorothy’s Visit to the Cumorah Farm

In the spring of 1936, Dorothy and Ellsworth made plans to visit Dorothy’s parents in Palmyra that summer with their young son Norman. In her life sketch she recalls:

The summer of 1936 we vacationed at Cumorah Farm, near Palmyra, N.Y. with my parents. Lois, who had been with us for her senior high school year, returned with us. It was thrilling to see the first pageant presented at the Hill, which was co-authored by my brother Oliver, an Eastern States missionary. I was able to help with publicity posters. Our 15 mos Norman was used in a covered wagon sequence of a pioneer panorama presented one evening at the Hill.4

The 1936 pageant was a family affair. Her parents Hyrum and June and brother Oliver had key roles developing the pageant, and sisters June and Lois Smith participated in the pageant. Even her one-year-old son Norman rode in a wagon as part of the festivities. The images below reveal pages from Dorothy’s Book of Remembrance that chronicled their trip.5 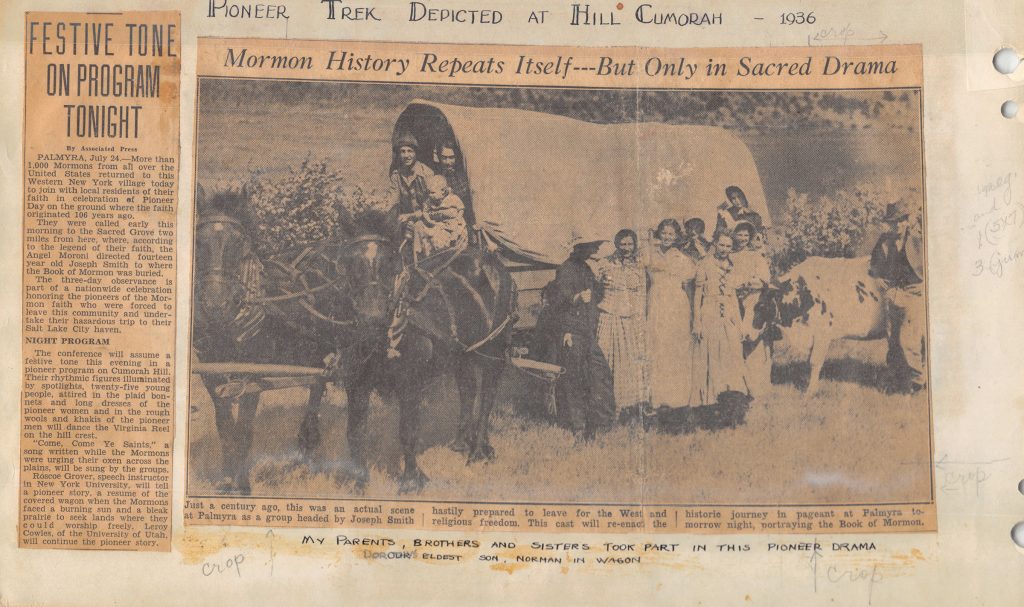 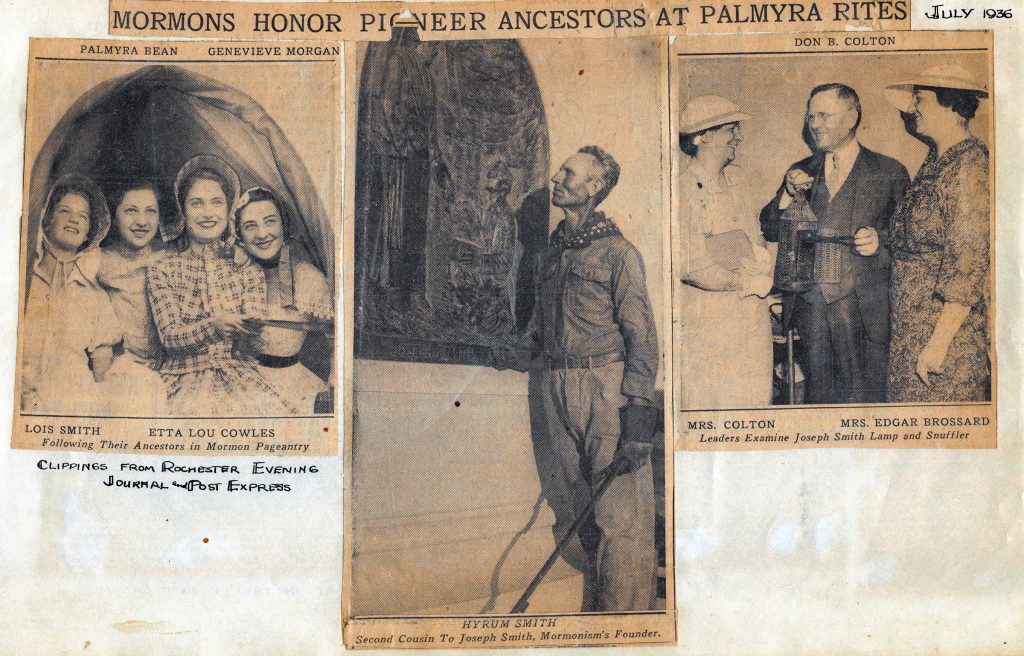 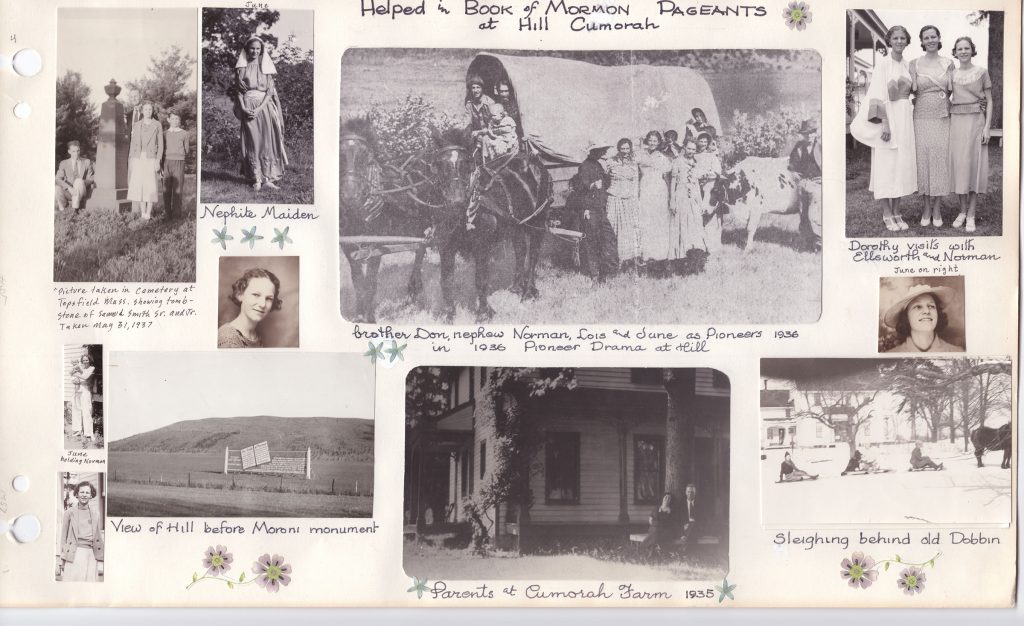 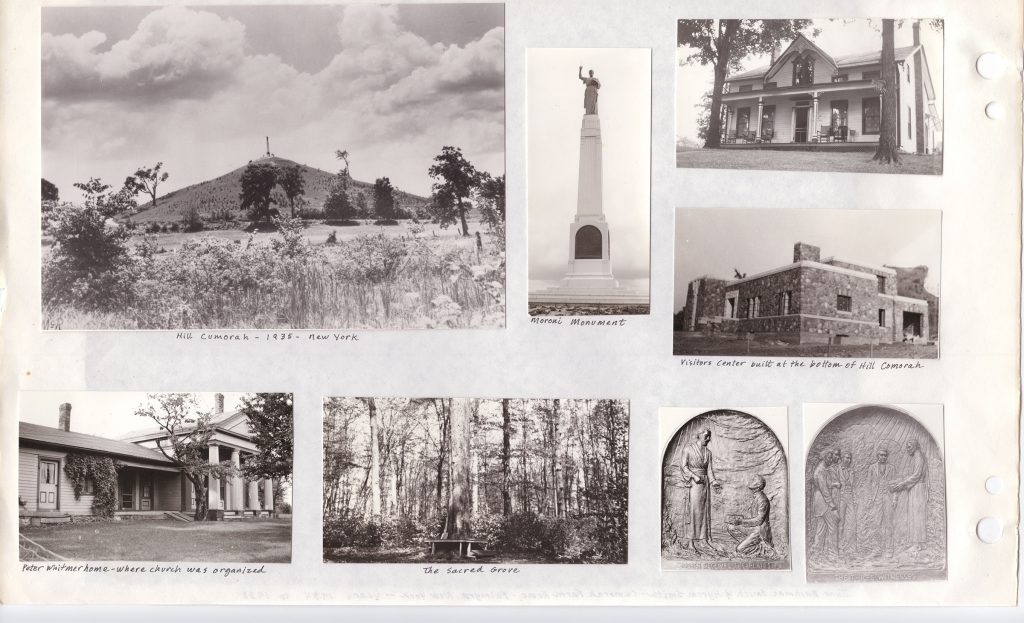 6. Smith, June A., Book of Remembrance, in the author’s possession